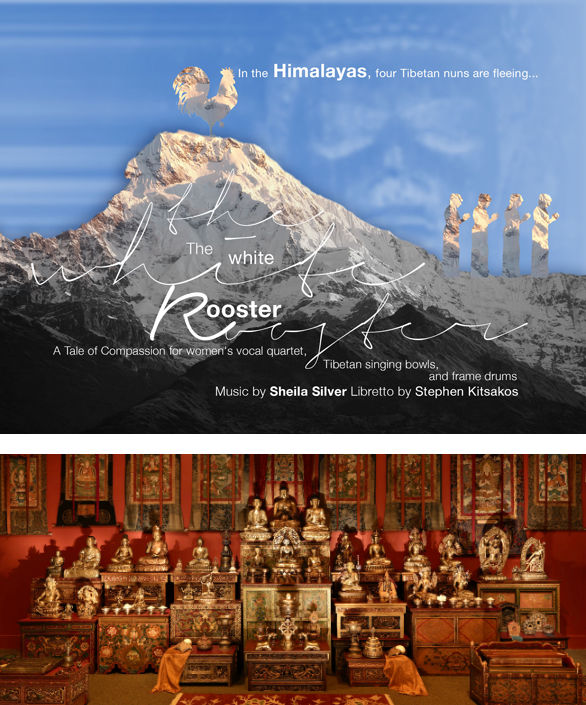 Opera in One Act. Music by Sheila Silver.

The White Rooster is a postmodern musical interpretation of a mythic Tibetan folk story placed within a contemporary setting in the tradition of a “play within a play.” The score incorporates ancestral Tibetan melodies along with chant, ensemble singing, recitative, aria, and spoken dialogue. The work’s sole instrumentation is provided by six Tibetan singing bowls intended to be performed by the singers while various ethnic hand drums are played by a percussionist who emerges as a character at the end of the opera. It has been written to be performed in any found space including theaters, outdoors and the concert setting.

The narrative follows five Tibetan Buddhist nuns who are fleeing to India. When one of them is shot by a Chinese soldier they are forced to take refuge in an abandoned hut. While nursing their wounded sister, they enact a Tibetan tale about suppression, liberation and forgiveness. In the end, help comes from a most unexpected source. Emanating a spirit of reconciliation and healing, the piece celebrates the power of individual acts of compassion.

The work was commissioned by the Smithsonian’s Freer Sackler Gallery for their 2010 exhibit, In the Realm of the Buddha, which included works by the 17th century Tibetan monk, patron, and painter, Situ Panchen, as well as The Tibetan Shrine from the Alice S. Kandell Collection. It premiered in July 2010 and toured internationally.