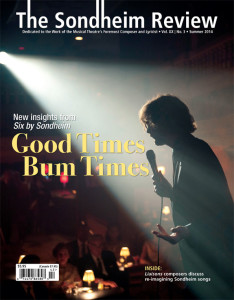 Her idols are two Judys: Garland and Holiday. The former she describes as the “ultimate, original singer, pathos-ridden and anguished,” and the latter as “the quirky doll-like woman.” In a way Broadway, TV and film actress Annie Golden embodies the essence of these two iconic entertainers. Still looking girlish at age 63, the ebullient performer, who created the role of Lynette “Squeaky” Fromme in the original 1990 Playwrights Horizons production of Assassins, has made a career of inhabiting offbeat, counter-cultural characters. These include Jeanie in Hair, Belle in O’Neill’s Ah, Wilderness!, Lucy Schmeeler in On the Town, the title role in the original workshop of Carrie and even the Tooth Fairy in commercials for Coinstar. But it was Golden’s seminal appearance as the Charles Manson groupie, dressed in a red robe and pointing a .45-caliber pistol at Gerald Ford in 1975, that brought her into the Sondheim “family.” Golden still lives with the ghost of that role.

“Someone recently said to me, ‘Have you ever heard from Lynette?”‘ she relates with animation, “and I said, ‘Listen to me: I come from rock ‘n’ roll and the streets of Brooklyn. You don’t ever want to get on the radar of a nut job. Ever. And you never want to reach out, even for your art.'”

Golden’s “art” has taken a circuitous journey from the hardcore punk Bowery club CBGB, where she fronted the new wave band, The Shirts. In the late 1970s that’s where Academy Award-winning director Milos Forman, scouting talent for his film of the musical Hair, discovered her and cast her in a starring role as Jeanie, the hippy-dippy pregnant girl.

“Once I was picked for the movie, then I was on someone’s radar for [Hair‘s 1977] Broadway revival and I became a legit actress,” she says. “And then suddenly the downtown people and the punk people are going, ‘Yeah, Annie sold out.'”

The Shirts, at the forefront of the 1970s punk rock scene, were a headliner band with a pop and dance-oriented sound. They were hip, cool and critically successful. “And then,” Golden continues, “all of a sudden there were reviews of the Shirts saying things like ‘Annie Golden and her boring Broadway proclivities.’ I had to look up the word ‘proclivities,’ but I knew it was a slag.” She insists that she always sang “the same way” with her band before and after she made her Broadway debut. “I was criticized because I enunciated the words clearly and I sang into the rafters and down in the basement.” But she had idols to follow like Garland, Sinatra and David Bowie, pop stars who did films, recorded albums and played concerts – all the things she wanted to do.

When she was cast as Squeaky, before anything had been written for her character, the “Pauls” (Gemignani, the music director, and Ford, the pianist) had said, “Stephen wants to know if there are any bands or singers you listen to now. And then I realized where I was. On sacred ground.” She was being invited into a historic collaboration with the world’s foremost musical theatre composer and lyricist. She mentioned to them that there was indeed a quirky English woman who wrote her own tunes. She was very theatrical, grandiose, perhaps a bit hysterical, and Golden admired her. Her name was Kate Bush. So when Golden first received Sondheim’s sketch of “Unworthy of Your Love” she noticed that the song’s structure honored her admiration for Bush and accommodated Golden’s vocal range and abilities.

Golden, who never learned to read music and did not have any formal vocal training, discerned from the song that, “first Squeaky’s gonna sing under Hinckley, then she’s gonna sing in a female key, and then she’s gonna surprise us all sounding like a banshee, high sweetly and then high shrieking.” This was indomitable Sondheim craft – the art of pastiche. The duet was perfectly suited to Golden and co-star Greg Germann, who originated the role of John Hinckley, Ronald Reagan’s would-be assassin.

Her lack of conservatory training has not deterred her. “I’m told I have a really good ear,” she explains. “I tape and drill myself. I break things down by phrasing, and I say to myself, ‘You’re stumbling over that, you’re not getting this, you’re not hearing that.'” She’s not even sure she learned “Unworthy” correctly. “To this day,” she tells me a bit sheepishly, “I’m uncertain about my accuracy in singing what the maestro wrote. The Pauls gave me a nightly note about a specific moment in the song, and I don’t even know if I understood.” She goes on to say that she might have gotten away with it because she originated the role and confesses, “I think there’s that original Broadway sacrosanct moment where they say, ‘Never mind. She’s gonna sing it that way.'”

Booking the job in Assassins pushed her north of the raw sound, south of New York City’s 14th Street and into the world of musical theatre coaches and singing instructors. When she found out she had the opportunity to sing for Sondheim and director Jerry Zaks, her friend Kathy Najimy said, “My boyfriend John will accompany you.” With little legit musical theatre experience, Golden didn’t have an audition “book.” And no one knew much about the new Sondheim project.

It turned out she sang two optimal songs for her audition: the ballad “Frank Mills” from Hair and Mack & Mabel‘s “Wherever He Ain’t” for her up-tempo, two numbers about a devotee caught up in the world of her guru – perfect choices for Sondheim and bookwriter John Weidman’s fictionalized Squeaky.

When she found out she had won the part, she was anxious about portraying a potential presidential assassin, wondering how it might affect her trajectory as a performer. “Up to that moment I was the downtown diva, the illegitimate child of the legitimate theatre.” But she decided she would “surrender, which is what you do as an actor.” After all, it was a brand new’ piece of theatre, a new Sondheim show, and she adds, “How do you walk away from that?” Eventually as she began to delve more into the part, she realized she would be playing the flip side of Hair‘s Jeanie, the street waif who runs away with a bunch of boys and meets a cowboy from the Midwest. “What if Jeanie landed, instead of at Central Park, on a ranch on the West Coast, and everybody was saying that guy Charlie is so cool? Which is what everybody was saying about Berger and Woof,” two charismatic characters in Hair.

She raves about Weidman’s ability to twist ordinary things into historical meetings and likens it to Shaw’s juxtaposition of St. Joan: “She’s dead and she visits the Dauphin, as an older man,” she explains, “when he was haunted his whole life and she puts him at ease.” And then Golden reminisces about receiving the script for the park bench scene with Sara Jane Moore, a housewife trying to get a handle on her ADHD kid when “a crazy hippie chick comes over panhandling.” Or the day she got the draft of “a guy is trying to write a song. He’s unpopular, a shut-in whose been bullied and he’s sitting in his room with a guitar singing to his dream girl who doesn’t know his name and would hate what he has in mind to get her to notice him. And then this ballsy, sexualized, drug-addled, anti-establishment chick sits on his lap and gives him a lap dance.”

The scene set up “Unworthy of Your Love,” one of Sondheim’s most popular songs. And Golden is regularly called to sing it at events like Children and Art, the Sondheim tribute benefit, the Sondheim Unplugged series at the swanky nightclub 54 Below, as well as in her own cabaret act, Annie Golden’s Velvet Prison (“the concept is you’re trapped in something that you wouldn’t have any other way”).

Being in prison seems to be working well for her. With her role as Norma Romano, the traumatic mute w’ho works in the prison kitchen on the 2013 Netflix original series Orange Is the New Black, she gives what she calls “a silent small screen performance” alongside her buddy Gina Murphy and Galina “Red” Reznikov, played by Kate Mulgrew.

But it’s all things Sondheim that are infused in her performance aspirations. “People have been saying there’s a Mrs. Lovett in me, but, honestly, the role I identify the most with now is Mama Rose.” After all, Golden calls herself the mother hen and the lioness of the community. And what a journey that would be. Everything coming up roses for the former flower child – both fanatical devotees of an elusive fantasy.